Last evening my hubby and I decided to re-visit a fave film of mine, one that I have not watched for a very long time but reviewed on this blog in 2012. It was none other than the 1971 screen adaptation of Jacqueline Susann’s mega bestseller THE LOVE MACHINE, directed by the guy who brought us The 42nd Academy Awards the year prior, Jack Haley Jr. I have no clue as to why executive producer and Susann’s other half Irving Mansfield have opted for this man, but Haley sure made everything look bright and groovy, never a bad thing in my opinion when it comes to early ‘70s showbiz over-the-top dramas.

The first thing I remembered while watching the film is how happy a kid I had been the first time I had set eyes on it. I was around 10 I believe and I had just spotted one of The Price is Right original beauties Anitra Ford. She was in the fashion TV montage, broadcasted through the living room of the Judith Austin character, wife of the head of the IBC network who eventually makes and breaks Robin Stone’s career. But I’m ahead of myself. Let’s get back to stunning Anitra Ford for a second. I was a major Price is Right fan at the time and was simply astounded catching her in the film. I stayed glued to the screen in the hopes of seeing her again but to no avail. But it barely mattered, for by then I was already caught up into the whole cinematic debauchery.

For those who have yet to see it, THE LOVE MACHINE focuses on Robin Stone, a TV reporter who sleeps his way to the top. Of course no female character emerges unscathed on his fast and sexy journey to get there. One person who learns this the hard way is sweet but dim-witted top model Amanda. By the time she realizes her predicament she has already been used and abused by him (a hard slap on the face). And that’s where it gets tricky, folks. Had the role been given to a better actress her pivotal downward spiral scene would have been something to watch. As is with then-newcomer Jody Wexler at the reins, she barely makes waves. Oh make no mistake Wexler is still fun to watch but she can hardly hold a candle to the other seasoned performers sharing the screen. It’s no surprise that THE LOVE MACHINE ended up being her only film. She passed away in 2013 at the young age of 68, according to IMDB.

In the novel, the character of Maggie, another one of Stone’s conquests, is fully developed. In the film, however, she has three scenes. In the first one we learn that Maggie (Sharon Farrell) has already been used by Stone when she admits to have ‘auditioned’ for him for a project from which she is now being axed (reminiscent of Neely O’Hara’s abrupt exit from a Broadway musical in VALLEY OF THE DOLLS). She seems angrier for having been denied the role than for having used the casting couch to better her career. It is further confirmed when Stone chance meets her at the infamous party scene brawl at the end of the film. There she claims to having finally ‘landed’ a few roles, which makes Stone very proud. Later on, when Stone is in need of a pick me up after losing everything she offers him a lift (in other words, her help) in her expensive red-colored Jaguar, which definitely shows a somewhat lucrative career on her part. What kind of a career, that we are never sure. Stone still chooses to reject her offer. One thing we are positive though is that there clearly is a kinship between the two characters, one that will probably never come to fruition. I don’t recall if they end up an item in the book. I’ll have to check it out and come back to you. 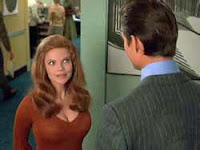 One female character who ends up not being on Robin Stone’s sexual radar is ‘celebrity fucker’ Ethel Evans who also works at the network. Her reaction to his cold rejection after making a pass at him? ‘You don’t know what you’re missing, buster’. Of all the women in the film Ethel is the trashiest and, strangely enough, the most likable. She knows what she is and makes no apology for it. When plain comedian du jour Christie Lane (the effective Shecky Green) makes an honest woman out of her Ethel finally feels vindicated, a stepping stone from her wild, wild ways.  She may not have landed prince charming but is very much satisfied with her newfound posh life. Besides, now that she is with child and still manages to wear the pants in the family what more could she ever want? Actress Maureen Arthur is perfect in the role. Her facial reaction to everything her clumsy husband does or says is pure comedic timing gold. We can’t see anybody else playing Ethel. Kudos to the great Miss Arthur who, BTW, is still alive and kicking as we speak.

That leaves Judith Austin (Dyan Cannon), who, if you remember, is the powerful wife of IBC network owner Greg Austin. Clearly you wouldn’t want to mess with her, but Robin Stone does, big time. When he ends up shunning her Judith sees red. So she vindictively sets his bedroom on fire while Stone is in the shower with two other ladies. Later on while being ignored by Stone at that infamous lavish party held by famed gay photographer Jerry Nelson (played to perfection by David Hemmings) she discovers a misplaced self-inscribed bracelet belonging to Jerry but given by close friend Stone. Believing that the rumor mill is true, that Stone swings both ways, she is hell-bent on destroying his career. What follows is the zaniest cat and mouse chase in film history as Stone tries his hardest to retrieve the piece of evidence that will ruin him. He eventually does get it back just before the cops and the press show up but he still ends up losing everything in the end. What a guy to do next? Moving on, as singer Dionne Warwick so melodiously sings during the end credits. Indeed, the film makes you think that you have not seen the last of him and we certainly believe it, for he is Robin Stone after all, THE LOVE MACHINE.