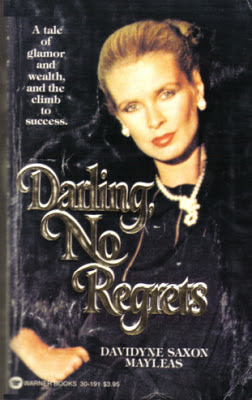 Being a proud and longtime escapist fiction bookworm, I’ve come to realize that the trashy novel has three sub-genres. There’s the first, the all the way trash-fest where the author goes from point A to point B without any real fanfares (anything from the Zebra and Leisure lines during the ‘80’s fits the bill). Then there’s the better-structured trash, with sleazy plots galore but done with stronger narratives and fun situations (anything by Collins, Susann, Hirschfeld, Kastle). Then there’s the class-act trash where it’s all big and bold, from the narrative to the plot structure to the multi-layered characterization. Judith Krantz, Jacqueline Briskin, Michael French, Dominick Dunne deserve this spot. So does Davidyne Saxon Mayleas. Her DARLING, NO REGRETS is by far her strongest book. It’s her first as well. Published in 1981, it centers around a woman on the rise, sort of like the heroine of Krantz’s SCRUPLES, who suffers greatly in the name of love. Self love, that is; even though the world is her oyster.

The story begins with Franciejean arriving in New York City where she, like TVs Mary Richards, wants to make it after all. Problem is she barely has a plan, except using her little black book to phone past lovers. She eventually stays overnight with one, and the plot unravels from there. Indeed, from man to man and from job to job she climbs the ladder of success and finally finds love in Jamison Welsh, an international financier and famous economist. But her family skeletons eventually catch up with her, and what seems like such a privileged life soon becomes somewhat of a nightmare as she battles major inner demons.

I know what you may be thinking, and don’t worry, this is not “The More You Know” type of a book. The psychological depth is done to a minimum, just enough to flesh out the main character. Which is the strongest part of DARLING, NO REGRETS, the way the author succeeds in rendering her heroine authentic albeit the superficiality of her surroundings. Because in addition to her damsel in distress attitude, Franciejean has many flaws, one of them being unable to stay faithful to her man. Yes, you’ve read right. Finally a woman who cheats. One who’s also tenderhearted, fragile, business savvy, sometimes defeatist, but stronger than she thinks she is.

The narrative, while rich and sometimes poetic, is tight and  fast-paced, with a few typos and doubtful constructions here and there. But you just go over the line again and move on. And believe me, you’ll want to, for what happens to Franciejean will probably make you turn the pages even faster. I’m not giving anything away, but let’s just say that in DARLING, NO REGRETS rose-colored climaxes are far from being the author’s favorite cup of tea. This is a character study of a flawed woman whose past incidents have many consequences. It is as realistic a trashy novel can be, and I applaud the author for having had the guts to deliver this type of a gem. With all the novels going digital, I’m sure there’s a place for DARLING, NO REGRETS. There has to be. Are you reading this, ebook publishers?

Posted by Authorfan at 23:56 No comments:

'THE SEDUCTION' OF MORGAN FAIRCHILD 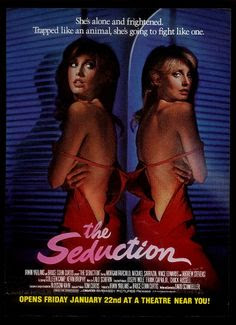 The year was 1982 and horror films were in high demand. You couldn’t pass a cinema marquee without witnessing a title or two. And suffice to say, I’ve seen them all, titles and films alike. That was my favorite thing to do, discovering upcoming horror flicks. So every Thursday late into the evening I made sure to pass by my local movie theater to check out the new posters for upcoming films. But at that particular time, what awaited me wasn’t exactly horror. More of the erotic thriller kind. It featured a scantily-clad Morgan Fairchild looking scared but ravished. I already knew who this actress was, having seen her around here and there on TV (in NBC’s FLAMINGO ROAD mostly). And based on what was displayed at that movie house, my interest was definitely pricked.

In the film Fairchild plays Jamie, a well-respected TV anchorwoman, who is plagued by what I call the Bacall syndrome. Those who have seen the 1981 Lauren Bacall flick about her coming face to face with a stalker called  THE FAN know exactly what I’m talking about. Jamie goes through the same motion, but contrary to the Bacall vehicle, the heat factor is highly contagious. Fairchild disrobes, skinny dips, is eyeballed by her co-star lover (the recently departed Michael Sarrazin)—and that’s just in the film first ten minutes. Later on we get a stalked heroine, the failing of the law enforcement to catch the deranged man (portrayed by an effective Andrew Stevens); we even get some black comedy routine delivered by a riot Colleen Camp who plays Jamie’s brassy best-friend. It all boils down to a slang bang conclusion involving failed sex and a loaded weapon (nudge nudge, wink wink) that fans of well-handled sleaze will definitely cherish.

I never saw the film on the big screen. It died at the box office so quickly that its run was shortened to a week (in Montreal). It took me a year or so to rediscover it, on my Betamax VCR, no less. But once I did, I immediately hailed it as one of the most effective exploitation film ever made, and I still do today. There’s something about it that is both compelling and dirty, a guilty pleasure kind of thing that works its magic despite its faults. Heck, it even paved the way for the king of all erotic thrillers, BASIC INSTINCT, 10 years later. And I’ll say it again: they sure don’t make them like those early gems anymore. If I had to name some of the best exploitation flicks of that era, THE SEDUCTION is up there with LIPSTICK, THE LONELY LADY and 1984 ANGEL starring Donna Wilkes. Sure, it ain’t perfect, like I said, with its sometimes improbable plot and hackneyed situations (could she just get a freaking bodyguard?!) but the film and the star are great to look at, and the fun is there from first reel to last.

The DVD is now alas out of print but there’s always someone somewhere selling it. Anchor Bay did a great job re-mastering the whole thing, and the extra features are as tasty, especially the audio commentary with writer/director David Schmoeller who gives insightful and amusing tidbits about the making of the film. Too bad Ms. Fairchild failed to partake in this discussion. It is believed that she has shunned the film for reasons only those associated with it know. A shame. For she’s really good in it and can make the sleaziest flick shine. Perhaps she’ll change her tune one day. Let’s just hope it’s sooner than later.

Posted by Authorfan at 18:53 No comments: