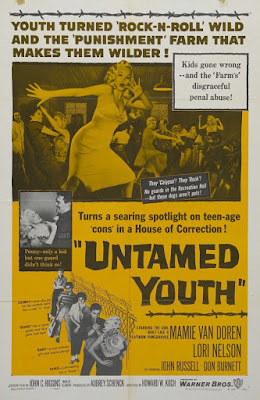 Mamie Van Doren plays a groovy drifter in the low-grade but enjoyable UNTAMED YOUTH.  In fact, she is so groovy that even the slammer can’t crush her spirit.  That is, if you can count cotton-picking on a farm as a prison sentence.  Yes, she and her younger sis are stuck there for 30 days after some dumb cop found them frolicking in a pond with no clothes on. In between working like a dog and sweating like pigs, Mamie sings.  She sings a lot.  In fact, that’s all she does.  She barely talks.  And she has top billing.  But the film really belongs to John Russell who plays the crooked warden.  He, along with his two vicious Dobermans, parades around abusing anyone just for the kick of it.  He lies, he cheats, he even marries the town woman judge—whom he obviously despises—just so he can get ahead.  She, on the other hand, worships the ground he walks on, until she finally sees the evil of his ways—with the help from her hunky good guy son and his soon-to-be girlfriend, inmate Lori Nelson, Mamie’s sis.  Following me so far?  Good. 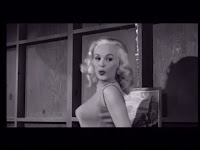 The rest of the film focuses on the kids partying after a grueling day in the field. Tiredness is out of the question.  They need to loosen up and fast.   So much so that you’ll wonder if someone has secretly put something in their drinks just so they can mimic the overzealous dance routine in REEFER MADNESS.  One thing I must make clear right away: though it is a prison film, no drugs or alcohol is involved with this bunch.  They are as clean and proper as any PG-13 prisoners can be.  In fact, they are so goody goody in their ways that you almost wish someone would decide to get down and dirty with Mamie; put her in a mud wrestling competition for instance.  But no such luck. What we get instead is a bitch slap scene between Nelson and some other female con and that’s it (“Don’t hit me in the mouth again.  You’ll break my dental plate.”) 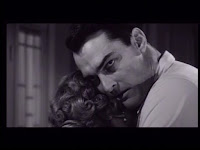 Warner Brothers had high hopes to cash in on Van Doren’s sex kitten appeal, and it did pay off despite her minimal talent.  Had I been a straight teen back in those days I would have drooled over her as well.  I mean, look at her.  All the right forms in the right places… She definitely is the epitome of a wet dream.  And that pointed bra.  She could easily yank an eye out with them puppies.  But thankfully she spares everyone, including fellow inmate and teen fave Eddie Cochran.  Too bad his career was short-lived (car accident), for he really rocks as the dude who refuses to be called a Cotton-Picker (the name of the song which, strangely enough, is very catchy). 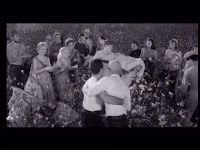 If having a big rack or belting out silly songs isn’t good enough for you, the film also features two guys dancing with each other.  Yes, two guys, swinging and swiveling while Mamie and other chicks just stand around looking happy as a clam. Or is it just that they are too dimwitted to notice?  In any case, the film was way ahead of its time, and I applaud director Howard W. Kosch for it (who subsequently became this big producer of glittery dramas such as TV’s HOLLYWOOD WIVES and ONCE IS NOT ENOUGH with Kirk Douglas). I even found myself looking for those same boys later on and almost spotted them dancing again, but got fooled by a short-haired girl. 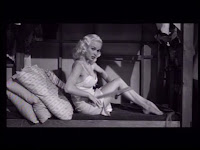 As expected, the critics panned UNTAMED YOUTH but the film did please some moviegoers.  It is now hailed as a semi-camp classic (as many other Van Doren vehicles, for that matter) and I can see why.  As much juvenile as the whole thing is, it does have a certain charm.  Blame this mostly on the B-grade star power Mamie has, or on the film’s ability to entertain despite its cliché-ridden plot.  Who really knows?  But the one thing I am sure: big pointy melons can do wonders for a male audience (and for some female too).   I say check out UNTAMED YOUTH.  You’ll either laugh at it or cringe.  Depends what rocks your boat.

Until next post—Martin
Posted by Authorfan at 00:14 No comments: Links to this post 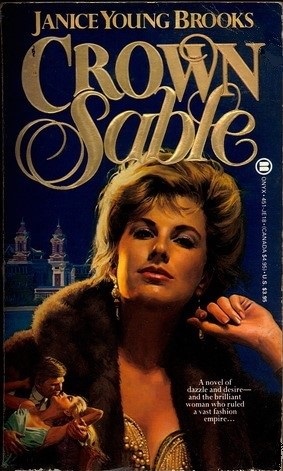 As any vintage book lover, I’m always on the lookout for the next title to add to my list.  So this means a lot of searching online or in actual used book stores (yes, some do still exist).  But what’s most rewarding is when you find the one book that you’ve been dying to read; like this reviewed title, CROWN SABLE by Janice Young Brooks (Onyx Books 1987), better known today as mystery writer Jill Churchill.  At first glance CROWN SABLE looks like the perfect summer read.  You know, a gripping tale amidst a lot of fluff and scandals.  Well as it turns out, the book is more a serious period piece than expected, thus less rewarding.  But still an enjoyable read.


The story takes place in America at the turn of the 20th century and revolves around a poor Russian immigrant lost in the Big Apple and who desperately wants to make something of her life.  For this particular storyline, sewing (what else?) is what makes her motor going.  Enter an older fashion king who sees big talent and revenue in her, and under his tutelage she becomes a great seamstress of fur (PeTA loyals beware) but with a faux background to fool the snobs.  In between keeping up with the charade, she gets married, sends for the rest of her Russian family, separates from her hubby; welcomes a lover… Ever since the success of Barbara Taylor Bradford’s A WOMAN OF SUBSTANCE, copycat novels like this one have filled the market, and why the heck not.  If it ain’t broken…
The best thing about CROWN SABLE is the same thing that ends up in a way hurting it: its narrative.  Strong and rich, it flows rather breezily without any flaws apparent.  One can even be in awe at its sheer efficacy.  The downside to all of that perfectness, however, is that it reaches even its main character, which comes about being just too clean and proper for my taste.  Even though she suffers immensely like any great heroine should, the overall effect is not as dramatic as it should be had she been more flawed.  Still, I say go for it if you want to try this author, especially if you’re into Danielle Steel.  They have the same vibes.  I just don’t think I’m impressed enough to go on with her backlist.

Posted by Authorfan at 00:08 2 comments: Links to this post