'TRINITY' BY NIGEL MAY 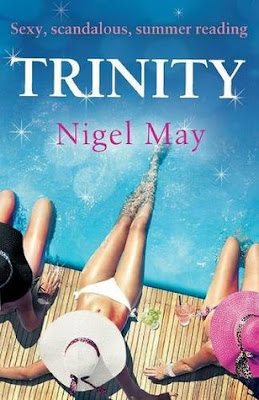 Slick trashy novels are fun when they give you exactly what you want, a good time. They do not have to be wordy; they do not have to be witty; they just need to be as gripping as they can possibly be. Nigel May’s TRINITY (Bookouture) fits that bill perfectly. It’s a story of friendship among the fast lane world of the entertainment industry. All three protagonists, old school chums, yearn to make it big, whether as a movie star, a gossip queen, or simply a more respected well-grounded individual. Of course, adversity comes back to bite them on their perfect little hineys, making the road to happiness a heck of a bumpy ride. But that’s the best part of TRINITY, the way the author manages to stir the pot big time: death threats, drug taking, bitch slapping, back stabbing, May December encounters, gay encounters… The list goes on and on to a slam bang climax that involves a different kind of coming out of the closet for one of the characters.

It goes without saying that reading TRINITY made me think of Collins and Robbins, but also of J.J. Salem. Especially of Salem, probably because I had just finished devouring his sexually-charged TAN LINES before embarking on the Nigel May’s reading train. Still, both use more or less the same theme, though May is way more out there (if you can believe that) with his in-your-face antics and narrative. TRINITY also has a heftier cast of characters, which overall is handled quite nicely despite a feeling of over-abundance. Moreover, the book is quite funny with it’s one liners and highly improbable but fun situations.
TRINITY may be hailed as just an over-the-top romp but is never boring. You’ll have a ball following the hectic lives of these super divas. Nigel May can really write up a storm for a first-time novelist. In a world of bonkbusters, TRINITY certainly does have its place in the best-selling dome. The question is, will it eventually get there? Only time will tell. But in the meantime check out the novel when it officially comes out as an e-book next month.


You can order TRINITY wherever digital and print books are sold.

Posted by Authorfan at 23:31 No comments: 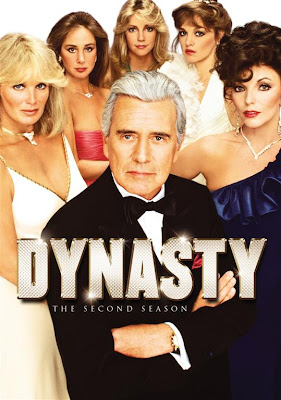 Yes, this is the one where icon Joan Collins makes her first appearance as the devilish Alexis, ex-wife of oil-tycoon Blake Carrington. It’s also the one where the late James Farentino shows up with big revenge on his little mind. Of the two, I’d say the addition of Collins is the best part of the second season of DYNASTY. She makes everything so much soapier. If you recall, season one scarcely made waves in its first run in 1981. Oh, it definitely made some towards me, but for ratings sake, the series was in full need of a makeover. And it certainly got its wishes with la Collins onboard. In the blink of a false eyelash, she made DYNASTY a real hit. It even paved the way for other nighttime soaps to shine, like FLAMINGO ROAD, BARE ESSENCE, PAPER DOLLS. They may not have had all the longevity of DYNASTY, but they sure as heck tried their best to impress us.

In this sophomore season, James Farentino does as well with his role of suave Dr Toscanni. But contrary to Collins his staying power is cut short to one season and with good reasons. His storyline stinks; all about his quest to avenge his family’s name after loosing a brother at the hands—or so he thinks—of Blake Carrington. It’s all devious and wicked, but try as he might (and believe me he does) Farentino is just unable to impress. He simply comes across as a know-it-all who likes nothing more than to spew childish memories every chance he gets. Even suicidal Claudia who is left without a husband and a daughter (they had flown the coup) can’t stand him, and she should know, she is stuck with him 24/7 as a patient under his psychiatric care, a gift from Blake. Speaking of the latter, it takes quite some time for Mr. Carrington to realize what is really going on with Toscanni, and when he does, it’s the battle of the fittest between the two. And on a mountain top, no less, leaving Blake all bruised up and KO as beautiful Krystle, who almost succumbed to Toscanni’s charms (!), worries about his no-show.

That leaves the biggest blunder of season two: Steven turning straight. Yes, in an over the top twist, we are made to believe that he is so infatuated with newcomer Sammy Jo, the trailer trash but sweet-talking niece of Krystle, that even he fails to resist her. One word for that: awkwaaard! I know, you don’t have to remind me, he had a fling with Claudia in season one, but that was a petty fling. One that barely meant anything except to cement his love for d— (well, in my eyes anyway). Now, suddenly he’s head over heals for Miss Thang with the big hair and the big smile and we’re supposed to agree with that?! Huh, no, but, it explains quite a lot. As we pointed out before, the big shots behind DYNASTY had a hard time dealing with an openly gay character on prime time TV. Pressure from big ad execs meant a loss in revenue. So to play it safe, it was easier to make Steven a hetero—at least for a while. This didn’t bode well with actor Al Corley who opted out at the end of the season, but not without giving his character a farewell speech acknowledging his gay persuasions. And all was well with the world again.

At least, Steven’s departure gave Alexis more screen time, which could never be enough. That’s how much I cherish her arrival, people. I mean, the woman can do no wrong. Whether it’s by moving onto the Carrington propriety or bitch slapping Krystle after making her loose her baby, she is a big breath of fresh air. Season two may not have been as strong script-wise but it is certainly grand, and all thanks to her. She utterly put DYNASTY on the map. After seeing her in action for the entire 22 episode arc, I can honestly say that it’s hard to imagine anyone else in the role. So let’s give a round of applause to Sophia Loren (huh?), without whom Collins would never have landed the gig had Loren taken on the part. Sometimes life has a strange way of giving you exactly what you need, don’t you agree?