'THE EXHIBITIONIST' BY HENRY SUTTON 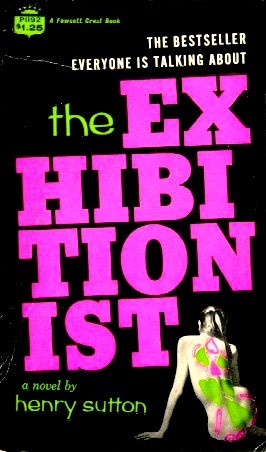 When Henry Sutton's THE EXHIBITIONIST shot toward the top of the New-York Times best-seller list in the fall of 1967 Jacqueline Susann took it very hard. VALLEY OF THE DOLLS had just come off the top ten after 65 weeks, and she felt totally betrayed that the same publishers would make her book compete with another show-business novel. It led her to cut ties with them and go ahead with the folks at Simon and Schuster for the release of her second novel THE LOVE MACHINE in 1969. Naturally, getting to know all that, I had to read THE EXHIBITIONIST STAT. Problem was I couldn’t locate a copy anywhere in the late ‘80s. Until one day after forgetting all about it I found myself at a local used book store with a beat up paperback copy in my hand and a relieved smile on my face. I’d love to tell you that I plunged right in the novel that faithful day but no, instead it took me many summers and winters to gather up the courage to read this thing. Why courage? Simple: I felt that if the queen of trash was having none of it then perhaps so should I. Crazy, I know. Yet it felt right. Besides, I already had taken a glimpse of the first few paragraphs and they were all about the Far West during the late 1800s. Clearly I really had other fishes to fry.


Fast forward to this year and what do you know? I just turned the last page of the controversial novel in question, and, surprise, surprise, I really enjoyed it. Not so much as a wicked page-turner à la VALLEY OF THE DOLLS but as a character study of a lost soul yearning to find herself out of the shadows of her star dad. Of course she makes one thousand mistakes before getting eventually there but as the novel progresses you find yourself rooting for her success.


To say that I heart the novel more than Susann’s classic would be unethical of me. So I won’t say that. What I would say however is that despite having the same theme THE EXHIBITONIST is completely in a different league. You get the literary treatment with this one (no wonder since Sutton is the pseudonym for acclaimed writer David R. Slavitt), not so much as getting all tangled up in fancy narratives but as being more than meets the eye. Sutton really goes out of his way to make a trashy book literate, and it works, most of the time, as a few parts take some minor adjustment to finally be assimilated. But as a whole the experience is very worthwhile. Those who may still be fearful of it not giving the campy goods, don’t. There are plenty of sexual situations and over-the-top moments to fill a scrapbook, and the heroine is a likable one so you’ll get plenty of no, no, don’t do that  bits to get you turning the pages even faster.


As it turns out, Jackie Susann had very good reasons to worry since THE EXHIBITIONIST is much more rewarding and, dare I say it, better written than anything she had ever released (gods of the trashy books strike me now). Still I wouldn’t kick her to the curb because she’ll forever be my girl. Indeed, whereas she is still the reigning queen of mindless fiction, Henry Sutton is now the new king of serious trash. In hindsight, I’m really glad I waited all this time to read this gem. I probably would have not appreciated it as much had I dove right in once bought. Now, if I succeeded in any way, shape, or form in getting you interested in THE EXHIBITIONIST I really hope your journey to reading it will end up being as fulfilling as it was to little moi.


Until next post—Martin
Posted by Authorfan at 23:34 2 comments: Links to this post

Labels: The Exhibitionist by Henry Sutton

‘THE KNOCKOFF” BY LUCY SYKES AND JO PIAZZA 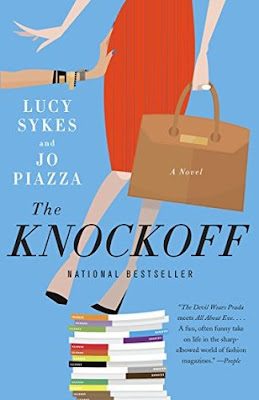 I think it’s time for me to focus on 2015 THE KNOCKOFF (called TECHBITCH in the UK) by Lucy Sykes and Jo Piazza via Doubleday. Last year I gave their second work FITNESS JUNKIE an outstanding review and I remember promising myself that I would get to their first novel ASAP. Problem was my shelves were and still are so filled with unread books that I completely forgot about it. Cut to a few weeks later during my hard-earned vacation overseas and what do you know, the book cover is staring at my face. So of course I buy the thing and I dig right in. Suffice to say I’m far from being disappointed. In fact, I’m ecstatic and here’s why.


Just like in FITNESS JUNKIE, the main character in THE KNOCKOFF is a likable one. She’s a 40 year old cancer survivor whose world as an editor in chief for a renowned fashion magazine in New York is turned upside down when she is forced to share her position with a twentysomething former assistant now internet wizard. Imagine a spoiled child turned adult and you get a pretty good idea what that character is like. She claims she can bring the magazine into the 21st century of digital craze—to the expense of our heroine who not only feels threatened by her but who also has to learn the tricks of the cyber trade to survive this merger of technique and creativity. In comes a series of situations so wacky and humiliating that the idea of her quitting and owning a dream house in New Orleans becomes more and more tempting. That in a gist is the premise of this firecracker of a novel. Of course there is more to it than the work place, like family and the cyber bullying of her pre-teen daughter or the fear of facing cancer again…  All told with pizzazz and a habit of making the readers turn the pages very quickly.


I found myself smiling often enough while investing myself in this novel. The central character is sure relatable and the way she’s thrown into the swing of things makes for a fresh and satisfying read. I got to admit that the plot, while always interesting, has a tendency to feel like a cumulation of events more than anything else but, like in FITNESS JUNKIE, it works perfectly well with the theme of the story. I plan on continuing following the journey of these talented authors, whether a solo act or partners in crime. They sure have this je-ne-sais-quoi to render anything worth checking out.


You can still catch this title wherever digital or non-digital books are sold.


Until next post—Martin
Posted by Authorfan at 01:10 No comments: Links to this post

‘THE GREEK ESCAPE’ BY KAREN SWAN 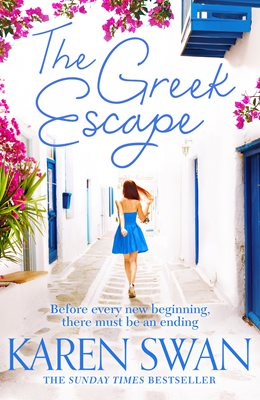 I don’t know how prolific Karen Swan does it but again she managed to win me over with her latest, THE GREEK ESCAPE. I got the chance to get myself an advanced reading copy (thanks to the publishers at Pan Macmillan and the folks of Net Galley) and let me just say that if you’re a Karen Swan devotee you won’t be disappointed. Her heroine this time is a London gal—running away to New York City from a toxic relationship—who must replace a much-loved colleague at a luxury concierge company (they provide, well, luxury, to the well-to-dos) who fell victim to a hit and run. At first everything seems to be honky-dory, if not a little hectic, as our little British go-getter makes it all happen for her friend’s benefit. But when out of nowhere comes a sixth client, a hunky one at that, who asks for the impossible (finding a specific secluded getaway in the Greek Islands) she soon ends up being way over her head, not to mention in danger, as what she is led to believe is far from being the truth.


I always feel that I do little justice to any novel I try to summarize, and THE GREEK ESCAPE is no different. The novel is so much more than this little synopsis of mine and so much more than what the industry would simply call a romantic suspenser. It’s glitz and glam, it’s a whodunit, it’s a love story, just like many of the author’s later novels. I won’t lie, those early ones where more up my alley with the many problems of the rich. The story in this one however still never lets up as our spunky heroine plunges deeper and deeper into the nitty-gritty of things which may have dire consequences to her mind and heart. She is a likeable one, that central character—as many in her entourage; even some of her foes. That’s one of the author’s strength, to render flesh-liked anyone of her cast. Put them in fabulous clothes and set them off in exotic locations and you have an exciting page-turner worthy of a revisit. Yes, some of those plot twists are obviously expected but their overall resolutions are mighty clever. I tell you, the pages just fly by once again at the hands of Karen Swan, and if champagne and caviar are still a pre-requisite in between nail-biting suspense then I’m more than happy to continue to follow her career wherever it leads to.

THE GREEK ESCAPE is now available in Canadian stores only. The rest of you will have to wait a little longer—next July 12 to be exact.

Posted by Authorfan at 00:57 2 comments: Links to this post