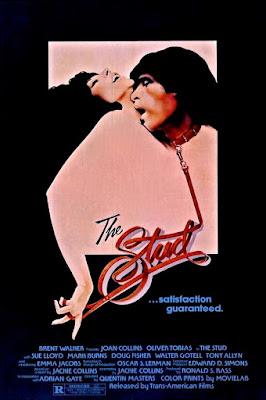 So here I am about to discuss yet again an earlier screen adaptation from the late Jackie Collins and I still have a hard time dealing with her passing. It’s not like I knew her or anything but, damn, how I miss that lady. I never had the chance to meet her in person but her many responses to my silly emails proved just how devoted she really was to her readers. Some say that it was probably just her assistant substituting for Collins but I don’t care. If one of my emails, tweets, handwritten letters, did manage to reach her in any way, shape, or form than I’m more than a happy trooper. Besides, I still have my TWO signed pics hanging in my house.

Now let’s move on to THE STUD. I think I read the novel before seeing the British film but I’m not 100% sure. One thing I’m positive, however, is that it was right after reading HOLLYWOOD WIVES since for me this was the one that started it all. I vaguely remember catching glimpses of THE STUD on TV years before but it was only much later that I came to associate it with Jackie’s work. Strangely enough, though, the author must have had ESP or something, for watching Joan Collins in this film is almost like watching the character of Alexis doing her thing before joining TV’s DYNASTY. It’s as if 90 minutes are spent test-screening the actress for her next big gig in America.

THE STUD in question is Oliver Tobias, a social climbing hottie, whom Joan can’t get enough of. So much so that they’re doing it all over the place: in lifts, in limousines, in water where he almost makes it with another guy but manages to escape just in time (darn!). He also has an eye for Joan’s step daughter which ultimately ruins his sexual relationship with the older woman as he starts questioning his lifestyle. When Joan gets tired of him and learns of his plans to open a discotheque of his own (he is the manager of Collins’ highly-sought nightclub), she gives him the boot—not before getting him roughed up by some bodyguards in the club’s bathroom, leaving him with a messed-up face and a broken dream (no new discotheque for him, as it turns out). Disillusioned with everything (including his would-be relationship with the step daughter which doesn’t go anywhere) he then rushes out of the establishment before the clock strikes midnight on the New Year to start anew. The end credits roll.

What’s still cool about THE STUD, besides the club scene and all the sexual situations that come with it, is finally being able to see a central male character regarded solely as a sex object. Not an innovation per se but one seldom used in cinema. But that’s Jackie Collins for you, always pushing the envelope. Plus, the soundtrack is a must for ‘70s disco fans. From K C & the Sunshine Band to Tina Charles to Rod Stewart, it’s all here for your ears to enjoy. I recently purchased the DVD copy of THE STUD (and its sequel, THE BITCH) from KL Studio Classics and re-watched it and, suffice to say, I still had a good time. I’m up to the audio commentary by film historians David Del Valle and Nick Redman (who?). It should probably be interesting. Supposedly co-star Oliver Tobias believes the film ruined his career. Too bad for him but he sure is tasty in it. If you have yet to see him (and Joan of course) in action take the plunge and catch this film. Being a Jackie Collins fan sure does help but if you’re in it solely for the boobies of her sis or the hot bod (without the schlong reveal) of Tobias, I’m sure you’ll have plenty to sink your teeth into.