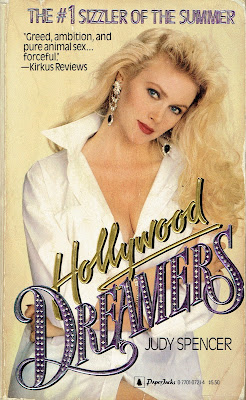 This one, though I have fond memories of it, came with a price.  Again I got called out for loving trash, this time by a bunch of gay guys. I barely knew them since I was accompanying my future husband driving to Toronto’s pride. I made the mistake of taking the book out, thinking I was safe around my peers. How wrong I was. Anyway, to make a long story short, I still didn’t have the courage to assert myself. I only blushed and, yes, slid the book back in my backpack’s front pocket. I remember glancing shyly at my new boyfriend whose green eyes seemed to say forget those jerks, so I did. Besides, I was already on cloud nine—being in love and all—so only he mattered.
That’s what HOLLYWOOD DREAMERS (Paperjacks, 1987) eventually ended up becoming, a sweet page-turner I barely could live without. The lives of these two fast friends while trying to break into show business and juggling love and happiness is as compelling as any Jackie Collins novel. Well, almost, if you can take some parts with a grain of salt (the climax about the possible murder of one of the two main characters leaves something to be desired in my opinion). But on second thought the same applies to most of Collins efforts, so there. Judy Spencer weaves a fine tale of secrets and sins that’ll make you want to read some of her other stuff. To date only REDHEADS exists besides this featured title. In fact, I wouldn’t be surprised if Judy Spencer was a pseudonym for an established author, like Elizabeth Gage is supposed to be. Though I tried to find out, nothing on the net validates that belief so far.


Still, Judy Spencer’s HOLLYWOOD DREAMERS crackles with spunk and sure is worthy of a wider readership. I don’t recall it being a huge best-seller but I guess it did find its way since we’re still talking about it after 30 years. One thing’s for sure, though, even if it’s been overlooked for some reason or another, the most obvious being the overflow of genre books at the time, the fact of the matter is the novel is still worth a second look. Yes, I don’t know squat about this release except the fact that I enjoyed it but in the end, who gives a flying whoop. The important thing is that you discover it and perhaps, given half a chance, you’ll love it too. 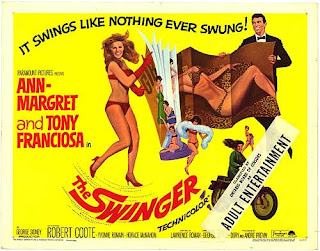 Let’s get right down to business: Ann-Margret is a knockout in the delectably awful THE SWINGER which reunites Margret and her BYE BYE BIRDY director George Sidney. In it she plays an inspiring writer who will do anything—and I mean anything (except that)—to get published, that is when she’s not dancing her tush away in a commune which also inhabits a vice squad officer/wannabe artist or sitting on a swing while belting out the catchy title song à la, well, BYE BYE BIRDY. Lured you into seeing this gem yet? Good. ‘Cause everything in THE SWINGER is très wacko, from the lurid voice-over narration that describes the sexual goings-on of a Playboy-like magazine owner, to the many sultry scenes of supposed decadence that Margret’s puritan character tries her hardest to emulate.

In fact, THE SWINGER is at its best when it goes all the way into smut zone. Of course the film would never had been made today on account of all the real sexual misconduct scandals happening lately. But for the benefit of the era in which the film was made, let’s just say that the male libido is as highlighted and glossed over as a hooker in a limousine. And looking at this fetching fiasco it sure ain’t a bad thing, believe you me. 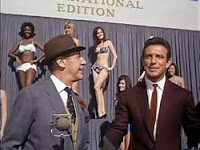 As I said, THE SWINGER is really good when the focus is on sex and sin, and that’s about half of the story. The rest of the film is quite silly as Margret—pretending to be bad so Anthony Franciosa (from THE PLEASURE SEEKERS fame which also stars Margret) subsequently publish her tawdry story based faultily on herself—ends up becoming clay to Franciosa’s Pygmalion ways. There’s no question the two leads eventually become an item. So we just go by the cinematic flow of seeing them doing their thing while wondering if the film could have been better had the sexual performances of the female star been the sole focus (which in a way it still is since Margret is sex on a stick). As the song and dance go, Margret once again shines in her vocals and moves, especially the go-go line dancing early on in the story. 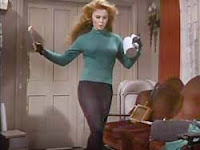 I first saw this film in the late ‘80s, having caught it one rainy afternoon on TV. I was already a big trashy film buff and had heard that this one was as wacked as it could possibly be. So true it was, and still is considering the topic for a ‘60s film. Sure, it’s no VALLEY OF THE DOLLS but the fun is still palpable enough to grant THE SWINGER two thumbs-up. It may not be as perfect as I thought it’d be but it still deserves its spot as a must-see for camp classic devotees. It has yet to conquer the DVD/Blu-ray market but when it does I sure am going to purchase myself a copy. Until then, I will keep hold of my used VHS copy transferred to a disc. 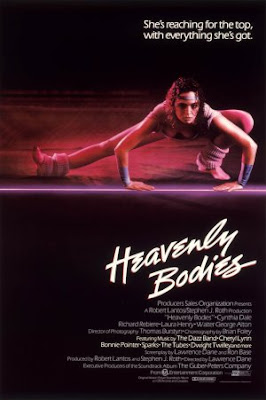 I remember the publicity for this film. You couldn’t flip through a newspaper or a magazine without seeing some sort of a poster ad (in Canada anyway) for the movie. I was around 20, living it up in the village, embracing my new-found freedom as a gay man. I was out every night all night and trying to go to school in between which turned out to be a pain. I ultimately ended up putting a temporary halt on my education (NOT very smart, I know) to spend the rest of my time, when I was not working, reading trash or going to the cinema. So when this FLASHDANCE rip-off came my way in February of 1985 I was more than ready for it. 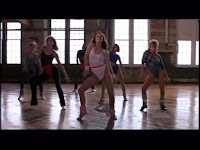 Yes, HEAVENLY BODIES is as cheesy as it can get but is still enjoyable thanks mostly to the star’s physical appeal. Cynthia Dale embodies a popular aerobic dance instructor who challenges a competitor in a televised marathon of the fittest for a chance of owning the loft where stands her health club. What you get in between is a cliché-ridden subplot involving single-mom Dale and her perfect son, a blond football player as a love interest, and many, many jiggly moments of aerobic moves that are topped by an uninspiring ‘killer’ soundtrack. Unsurprisingly, the performances of its actors verge from OK (Dale) to so-bad (everyone else). Ms. Dale may work her hardest to bring any semblance of humanity to her paper thin character but it’s her well-choreographed exercising that is really the star of the film. 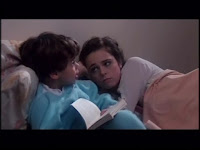 That said, if you have a keen eye for bad cinema I think you’ll enjoy this one. Underneath all the faux pas is a film that wants to be great. The problem is that despite its slick production values it’s all hardly well-handled. But that’s what makes HEAVENLY BODIES so lovable, the way it ends up being so good but for all the wrong reasons. 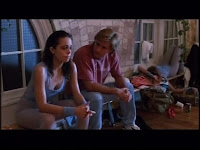 The film was apparently co-produced by Playboy. In spite of  that it tanked at the box office. It probably aired endlessly on their Playboy channel and became some sort of a camp classic in the long run. It did in my eyes. Hope it does the same thing in yours. It sometimes runs on TCM. Catch it if you can and get back to me. We’ll compare notes.