SHIRLEY CONRAN AND HER 'SAVAGES' 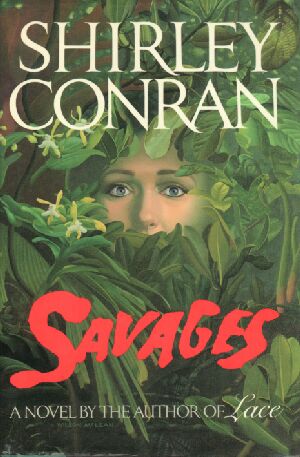 Those who have already read my blog entry about Penny Vincenzi’s OLD SINS will know that I tend to stray away from hefty novels. Not because they aren’t my cup of tea, but life is too short to invest my heart and soul into long-winded works. Well, that’s what I thought for the longest time until I got a hold of OLD SINS. Anyway, to make a long story short, let’s just say that I still feel the same way but not as much, which is the reason for this new entry. I finally managed to read Shirley Conran’s SAVAGES in its entirety. Yes, again, like many others before it, I tossed up the book twice before finally sticking with it. At 691 pages (the International mass market paperback edition) you can imagine the degree of devotion I needed to keep with the flow. But I did persevere and I’m proud to say that it is one heck of a read.

The story revolves around five privileged women who must rely on themselves when their respective husbands are assassinated during a business trip in the tropics that bumps into a revolution. Different as night and day, these ladies will nonetheless form a solid bond when they end up surviving for weeks in the jungle. As you can imagine, SAVAGES is far from being all glamorous with its many tales of skinning, fishing, even slaughtering as mean to stay alive, but the investment is as worthwhile. Conran delivers a strong narrative that replaces lace and diamonds with strength and willpower,  making this offering her strongest book yet.

What’s also great about SAVAGES is the way the author shies away from the stereotypical route, choosing a more creative one that packs more punch. I was expecting (and dreading) these survivalists to be caught in a big tribal scene since they are stuck in a jungle, but Conran envisions it quite differently. For when it does seem to go there these ladies are already far and away, trying their best to get rescued from the right people. Because the bad guys are not necessarily the ones with painted faces. Let’s just leave it at that. 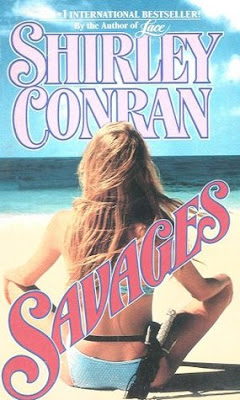 Like I mentioned earlier, the edition I ended up with is the international one from Pocket Books that usually invades airports across the Western or Northern skies. I found it in an used bookstore at a Montreal hospital after having taken care of a busted knee (running accident). This mass market copy differs slightly from the  UK or Canada edition. Starting with the cover which is a reprint of the dust jacket from the hardback. Personally I prefer it to the Penguin Books edition featuring a hot babe on a beach. It represents more what the book is. Moreover, the international paperback features a never-before-seen prologue focusing on two ill-fated secondary characters mentioned later in the story. I wonder if these extra pages are included in the just re-released edition from Pan Books (below). All in all, a grand novel to throw yourself into, whatever its length.

I read Savages based upon your recommendation. In the beginning, I struggled a little to keep the characters straight but it was a terrific read. There was nothing predictable about this book and I was sorry when it ended. In fact, I had hoped for a bit more...perhaps some insight into what happened when they returned to Pittsburgh. I was curious about how this experience would have changed them. Again, thanks for the recommendation!

So so glad you enjoyed it. Yes, the beginning is a bit hard to follow but once you get a hold of it, the rest is a breeze. Same here, would have loved another chapter or two as an epilogue. Thanks for visiting and don't hesitate to add another comment or two. Always a treat meeting other fans.

I have read "savages" twice now and I was wondering why there is not a movie made. I remember some many years a go a similar story / movie and I thought it was Savages. I can only say that this is the bestest novel that I have ever read and keep in my Library so I can read it a third and probably a third, fourth and waiting patiently for a Movie .. I did not find it hard to get into the novel. It was straight into it.. Describing the characters. I love it love it love it.

I read the book back in the 80's. Brilliantly written. I loved the story plot.