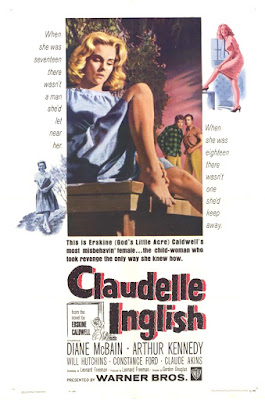 Bad girls on film is more than celebrated on Sleaze Factor; it’s a way of life. Just surf through some of the other entries on this blog and you’ll see how dedicated our approach to these cinematic vixens really is. We wouldn’t change them if our life depended on it. The newest to the bunch is 1961 CLAUDELLE INGLISH (based on a novel by Erskine Caldwell), the story of a good girl gone bad after being dumped by her man. Yes, that about sums up the entire film but we wouldn’t dare leave you high and dry with nothing else to add, would we? It’d be so unethical, especially if you devote your life to this type of film as we do. So strap yourself silly (pun or no pun intended, you decide) and enjoy, because  you’re in for a treat.

Onscreen bad girl expert Diane McBain is Claudelle, a poor rural teen who wants to fall in love and does with hunky Chad Everett. She digs him a lot. He on the other hand wants to get into her pants and does the minute he asks her hand in marriage. Her unfulfilled mom, played to the hilt by Constance Ford, is against the union from the start. She sees greater things for her daughter, like hooking her up with the town rich older widow Claude Akins who drools over McBain every chance he gets. But McBain has other things on her mind, like overcoming the hurt of being left bereft by Everett in a dear John letter (how dare he!). What a girl to do? Simple: become the town slut. You see, psychology 101 is what best works in these melodramas, and to do it otherwise would render CLAUDELLE INGLISH, just like its heroine, utterly soiled.

Of course, freshly-trampy McBain causes heartaches everywhere she goes, since she’s done committing to any guy. But give her a token of appreciation in the form of a pair of stylish pumps or a simple music box and it’s good time McBain. No men can resist her, even the middle-aged town merchant Frank Overton who ends up humping her in the back room of his store. When he gets caught by his prissy wife he forbids his teen son Will Hutchins to ever use McBain, but love has a mind of its own for the young lad and he pays dearly for his undying devotion to the town floozy.

Feeling guilty over her wretched ways, McBain tries hard to bring back her good girl image, with the help of her farmer dad Arthur Kennedy who’s the voice of reason à la Mike Brady (!) in this flick. But since he’s dumped by his wife himself when she runs off with the town rich older widow (remember him?), his passive ways catch up with him and, before he can even leave town with his kid, he ends up loosing a daughter as well, at the hands of a crazed john wearing an apron (hint, hint). So ends the misadventures of CLAUDELLE INGLISH who frankly would have been safer and perhaps saner with the likes of Neely O’Hara in New York or Nomi Malone in Vegas or, heck, even Jerilee Randall in L.A. Well, on second thought, maybe not; but imagine the sort of film that would make. 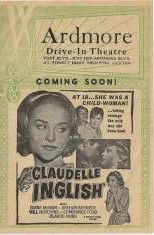 Posted by Authorfan at 23:59 No comments: 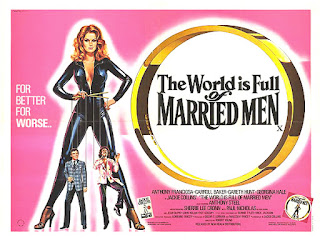 Anyone who’s into camp knows that this next focused film, THE WORLD IS FULL OF MARRIED MEN, is based on Jackie Collins’ first novel of the same name. If it’s all new to you, don’t despair. You’ll get there. Just follow this blog for an easier access. As I was saying, THE WORLD IS FULL OF MARRIED MEN is Collins’ other screen adaptation for which she wrote the screenplay (after THE STUD, another contender for Sleaze Factor). It stars Carroll Baker and the late Anthony Franciosa, two well-known faces at the time. The title song is sung onscreen by a young Bonnie Tyler (Total Eclipse of The Heart). The year is 1979 but I am totally unaware of this flick. In fact, I don’t even know who Jackie Collins is. It’ll be another four years before I discover her and her talent. In the meantime I try to survive as a gay teen. It does get better but this feeling of inner peace takes an awful time to arrive. So I read a lot. Fast forward to 1998 when I finally get a hold of Collins’ film on VHS and watch it. Suffice to say, I’m far from being disappointed.

As in the book, THE WORLD IS FULL OF MARRIED MEN centers around a housewife whose marital problems force her to take in a lover. Her husband, a master philanderer himself, just can’t accept his wife doing the same. When he’s kicked to the curb by his latest conquest, a manipulative sexpot who has no time for impotent middle-aged men, all hell breaks loose. Collins is as finely tuned as a screenwriter as she is as a novelist. Her dialogue is punched up by a string of exciting if sometimes silly situations that are as effective as they are in the book. You can feel she has a ball juggling the hectic lives of her over-the-top characters. Though Baker and Franciosa are more than fine in the lead roles, it’s newcomer Sherrie Lee Cronn who steals the film as Claudia (whatever happened to her, anyway?). Her turn as the devious vamp takes THE WORLD IS FULL OF MARRIED MEN to a higher degree of sleaze and makes it even more a must-see.

As far as the novel is concerned, I dove right into it after finishing up the glorious HOLLYWOOD WIVES in 1983. The Powers That Be at Simon & Schuster were already cashing in on the success of Collins by reprinting some of her backlist in mass market paperbacks and THE WORLD IS FULL OF MARRIED MEN was one of them. The cover showcases the same glamour pose of some jeweled woman dressed to the nines (as you can see at the bottom of the text). The story itself, however, is a shorter one (with a bigger typeset) but the Collins style is as evident, focusing on a feisty heroine grasping for a complete control of her destiny. The plot not only takes you into the world of the music business but also centers around the workings of the advertisement agencies. It’s always fun to dig into those when the author knows what she or he talks about, and Collins is an ace at that, just as she is in writing effective sex scenes; and they are aplenty believe me, even for a 1968 novel. Of course, one thinks of Jacqueline  Susann when dwelling into that era. How can you not? Both have the same style, both have show business in their blood. Both became queens of roman à clef. Collins’ heroines are stronger types however, which puts her a notch over Susann, but both authors deserve their rightful spots.

I so wanted to catch the movie adaptation after finishing this one up. I couldn’t even believe it ever existed. But there it was one day on eBay, for all the world to see, and at a decent price, no less. I still own it as we speak. I’m now waiting for the Region 1 DVD release which should occur at any moment. Well, that’s how I'd like to think of it even though nothing has been confirmed yet. It’s already out in the UK, so I don’t see why it can’t ever cross the Atlantic, right? RIGHT?!!!