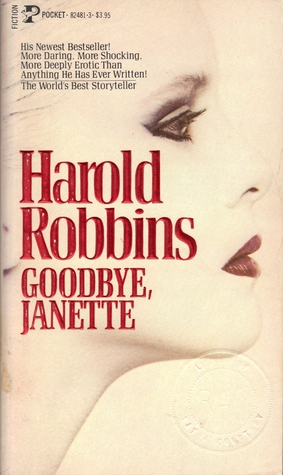 I wish I could say that Harold Robbins had a glorious career. But the truth of the matter is, by the late ‘70s, the author had become a shadow of himself. Partying took a toll on his writing and his work suffered. So it came as no surprise that by the time GOODBYE JANETTE (1981, Pocket) was released my appreciation of him had started to dwindle. However I got to admit that this novel was some sort of a turnabout for him. Gone are those male-dominated central characters filling his pages. Just like in 1976 THE LONELY LADY (Robbins at his sleazy best) the focus this time is on a heroine; well, four of them since it’s a multi-generational piece. The setting: the haute couture world—not very macho for a Robbins book. His unfavorable view of women, however, is still an ongoing thing.
Indeed, every female in this book is the scapegoat of his wicked pen.  Including the title character who, still a pre-teen, gets used and abused and loves it (!). The culprit is a closeted homosexual (of course he is) who has the biggest peen (of course he does) and has misogynistic tendencies (gasp, double gasp—not). The apparels chosen for her (and his other conquests) could easily rival those of Christian Grey but not his technique. He’s more the sadistic kind. Just like its author, it seems, who clearly gets off making his readership his bitch.
Another thing that is technically omitted from GOODBYE JANETTE is the author’s first-person POV, which is more than fine with me since I’ve never been too keen on this trademark of his. The novel is cut into four parts, spawning over many years and continents. When the story diverges from smut and focuses solely on the business side of fashion GOODBYE JANETTE is a fine read. You can even tell that Robbins has some knowledge on the subject. But these feel-good moments are pretty scarce. Of course, everyone is one-dimensional, and though you feel as if you should at least connect with some character, however big or small, you don’t. Instead you just go with the flow of bad writing and silly situations while shaking your head in dismay.
GOODBYE JANETTE was Robbins’ last hit before being stricken with a heart attack and confined to a wheelchair. He did manage to write other novels until he passed away in 1997.  Junius Podrog took over posthumously in the early 2000s. Though his books are supposedly well-tailored I doubt I will get to them. My reading choices have evolved somewhat since then. But if in doing so he has succeeded in putting Robbins name back in lights, more power to him I say. Robbins certainly deserves at least that. 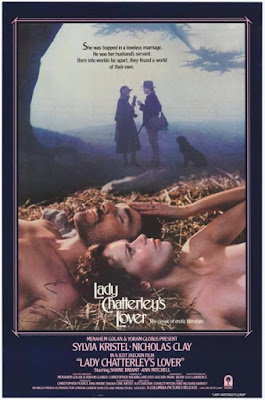 Like every teenage boy across the globe my sexual peak showed itself when I was around 15. It was a time where every schoolmate, every movie, every magazine or billboard ad screamed of sexual desire (mostly from Calvin Klein). So much so that I was ready to hump anything that moved. Thank heaven I also had films like this 1981 movie adaptation of the D. H. Lawrence classic—starring the recently-departed Sylvia Kristel and the late Nicholas Clay from EXCALIBUR fame—to temporarily cure that imposing itch.

Indeed, this enjoyable B-ride called LADY CHATTERLEY'S LOVER did more than the trick besides showing a panoramic view of foggy London. The sexually-charged performance of its two stars is what made the movie tick and still does today. Both bring nothing but skin to their performances of an unlikely duo engaging in a torrid affair and it is more than fine with me. Over an ultra-syrupy score (by Richard Harvey and Stanley Myers) and a fine use of camera work by Robert Fraisse, the two go at it like you wouldn’t believe, leaving nothing to the imagination except to wonder if the movie would have been better had a more talented cast been involved. Since this isn't the case here yet the film still manages to remain impressive despite its many flaws, I would gladly say that LADY CHATTERLEY'S LOVER is superficial enough to be considered camp classic material.

I’ve been thinking of spotlighting this film for quite a while. However, I wanted to catch it again before taking the plunge and write this fantastic review. You never know, it may have turned out to be an awful film over the years. But I’m happy to report that it has aged graciously. In fact, I found myself enjoying it even more this time around, especially now that my teen days are over and done with.

Oh yes, give this LADY CHATTERLEY'S LOVER a chance. It does not try to be artsy-fartsy nor does it pretend to be better than the dozen of adaptations. It’s just a little erotica from the director of EMMANUELLE which features the star of EMMANUELLE. Beautifully shot and always a class-act when it comes to any sex scene, this sleazier version of the all-time classic is for me one of the best sexploitation films out there.

‘THE MOVIE’ BY LOUISE BAGSHAWE 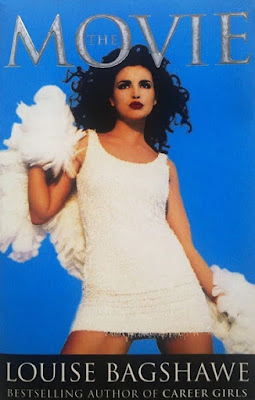 Before Louise Mensch introduced BEAUTY to the world in 2014 she was Louise Bagshawe, queen of the UK chick lit and sis of the other Bagshawe lady, bestselling author Tilly. Whatever reasons she chose to distance herself from her money-making brand name is her prerogative (marriage, confusion between sis…). One thing is for sure, she has not lost her touch. BEAUTY and CAREER GAME (the sequel to her first title CAREER GIRLS) are strong choices if you’re into those types of a read. Since I obviously am and cannot get enough of her novels, let me focus on one that I particularly hold dear.
Movers and shakers rule a motion picture set in Louise Bagshawe's THE MOVIE (called TRIPLE FEATURE in the US), a fun and dishy tale of beautiful people gone bad. From the angelic ingénue to the diva extraordinaire, Bagshawe takes you on a wild ride of sins, money and passion. Yes, we've all seen it before but Bagshawe's effective plot and colorful characters give THE MOVIE the edge it needs to stay afloat, making the end-result just as wickedly readable as any of Jackie Collins’ impressive back list. Yes, of course, good triumphs over evil in the end but who gives a flying whoop when the trip is such a wild ride at the hands of la talented Mensch.


I admit I have yet to read all of her novels but what I did end up holding, I devoured in no time. So let me make one thing clear. Whether the author goes by the name Bagshawe or Mensch barely matters; in the end what counts is the baby, the published one. And since she has been around for quite some time and certainly has proven her worth, let’s hope that 2017 will be the year the name Mensch shines as bright as if not brighter than any Bagshawe.

Posted by Authorfan at 02:56 No comments:

Labels: The Movie by Louise Bagshawe 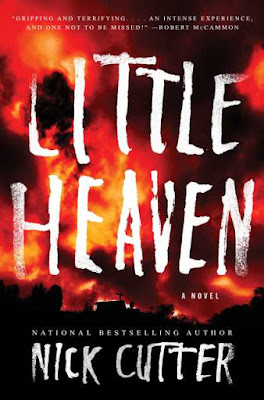 Ever since the release of THE TROOP, Nick Cutter (aka Craig Davidson) has been up there with the best of the current horror novelists. I mean, how could he not be? The guy certainly is capable of delivering the goods. So it comes as no surprise that his latest is no different. LITTLE HEAVEN (Gallery Books) tells the tale of a trio of renegades who unite to fight evil which comes in many different shapes and forms. The setting: an isolated backwoods compound where the work of a cult leader ends up heightening the fear factor of his flock, especially when relating to their children. Either some of those little ones disappear to never come back, or they return as ghostly entities with a big smile on their emaciated faces, as big as IT’s Pennywise, even.


In fact, the novel does tend to borrow from Stephen King’s classic but only from a structural point of view (time periods going forward and backward). The rest is totally Cutter, which may eventually surprise some or disenchant others, depending on your patience. Not that it takes a long while before things start going awry. But when the horror really kicks in nearing the book’s last third, a lot happens; too much even. As if the author needs to constantly wow us. What he brings forth, however, is still quite effective. If the reader makes it through without skipping any of those gruesome images he or she will be rewarded by the author’s vivid imagination—if not by his already impressive narrative, his strong hold on plot and characterization, not to mention his heartfelt of a conclusion that will make anyone yearn to revisit these protagonists’ journey.


What if the evil that men do had always had a fiendish supporter? That’s what Cutter tries and succeeds to convey in this novel (adorned by reproductions of some pivotal scenes by famed artist Adam Gorham). The end result may be a bit flawed, but boy, what an enriching ride LITTLE HEAVEN ends up being.


Thanks to the publisher and NetGalley for the chance to read this novel in exchange for an honest review.

Posted by Authorfan at 01:00 No comments: