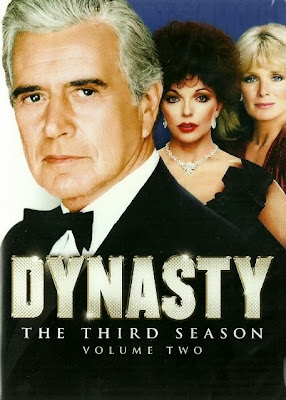 What a chore it is to recap this third season. Not that the series is anything but memorable. It’s just that I’m already up to season seven. And with all the problems that have plagued the Carringtons it’s pretty much a struggle to go back in time when you’re so far ahead. What’s safe to say is that season three brings up the return of Steven Carrington as a regular, played this time around by the cute but oh so wooden Jack Coleman. Now, now, before you all gang up on me like bullies, let me remind you that the original Steven, Al Corley, was way better in the role. He may not have been the greatest actor around but at least he had some diversified facial expressions. Coleman seems to be stuck on two, angry and angry. Yes, the character may be in a funk after a change of appearance (due to an oil rig explosion), not to mention battling his dad and Sloppy Jo for custody of his son, but showing a assortment of expressions on his fine re-constructed mug might render him a bit more believable and, thus, likable. As is, I almost wish he was still missing. Anyway let’s move on.

The addition of two new characters has some ups and downs as well. The discovery that Adam, the long lost kidnapped son of Blake and Alexis, is actually alive and kicking (and all grown up and sexy I might add) adds some spice to the soap. Gordon Thomson is playing him just right (take some pointers, Steven,  dear). And just like his TV mom, he’s as evil, if not more. The toxic paint he uses to redecorate Jeff’s office (just to get rid of him) may be way over to the top but it sure makes good television. Especially when he puts the blame on Collins who is rendered speechless to say the least. How does she get out of this one? Simple: she takes the blame (but is never charged for it—again). That’s how much she loves her kid, people.

As for Kirby, the majordomo’s daughter, well, maybe it’s just me but I still cringe every time I think of her (like just now). What a wimpy character, that one. Yeah, yeah, Kathleen Beller’s a fine actress and she makes do with what she’s got, but if sophistication is what producers were going for, then I’m sorry to say they have missed the boat completely. I mean just look at her. She’s obviously more of the Kumbaya type than anything else. I suspect longer hair underneath those armpits. And what about her involvement with Adam? Talk about a disaster hookup from the start. Raped and impregnated by him she utterly goes bonkers, and by that I mean BONKERS. I kept expecting her to befriend Claudia so they could do a double act. Speaking of nuts, now that Claudia is off Dr. Toscani’s patients list since he’s gone MIA (thankfully) after season two, she’s so much more messed up, and we thank the screenwriters for that. The whole Little Blake kidnapping thing involving her on a downtown roof was one of the highlights of the season. For a moment there I really thought Little Blake (what I stupid name, BTW) was a goner, that it wasn’t an actual doll that fell off the building.

But the most noted subplot has got to be the wedding of Alexis Carrington and Cecil Colby—Blake’s ultimate nemesis. The fact that she can do whatever the heck she wants, even marrying her beau from his hospital deathbed, just proves once again how devious and manipulative she can be. Because truth be told  she doesn’t really love Cecil (duh!). She’s more into his wealth and standing. A fact the groom clearly knows as he lets her have it mere seconds before succumbing to a heart attack. Widowed and now the most powerful woman in Denver, nothing will stop her from destroying Blake. Or so she thinks.

Half the fun in watching this third season is trying to make sense of the overblown story arcs; the other half is admiring the beautiful things shown on screen: the mansion, the cars, the work of arts, but especially the many sparkling jewels and gowns the female cast get to wear. Clearly the series wouldn’t be where it’s at had designer to the stars Nolan Miller not been in the picture. He sure adds some high class to an otherwise so-so season. Now, if only I could remember whatever the heck happens in season four. Oh yeah, Peter De Vilbis… Stay tuned.

Posted by Authorfan at 02:40 No comments: Links to this post