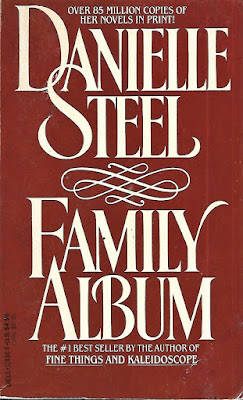 I think my first Danielle Steel was FAMILY ALBUM (Dell, 1986). Figures, since it showcases a gay character, the first and only one in a DS novel, if I stand correctly. He’s the son of the protagonist, a fame actress turned director. This featured title was one I dug very much. I think the year was 1990 or ’91. I’m not pretty sure. What I’m positive, however, is that it was during the time when I was on the lookout for something else to read besides Collins, Sheldon and Robbins. I wanted to jump on the DS bandwagon for a while, since she seemed to be so much popular amongst women readers. So one day I said, why the heck not, and dove right in FAMILY ALBUM.


I had no idea that one of the characters would be a young gay man. Of course I immediately connected with him. His fears, his anxieties, his shame of being found out... The romance between the heroine and the hero didn’t suck either but it was the story of this young man’s struggles that struck a chord with me, besides the show-biz subplot. As you can imagine, it all brought me back to my own experience of being a closeted gay man. Not a happy moment in my life, as you might also imagine. But moving on...


What I also loved about this novel is the relationships between the heroine and her four children. She is what you call the perfect mom, you know, warm, understanding, caring... She is everything a real-life mother should be (which, let’s be honest here, isn’t the case with a lot of people). The plot starts during WWII and goes on to the present day where tragedy strikes and strikes until the final big one hits a nerve with the readers. But like anyone of the Thayer clan we will conquer and move on... to the next DS offering when time permits.


FAMILY ALBUM was adapted to the small screen as a two-part miniseries in 1994. Of course I have seen it and I will probably put the spotlight on it one of these days. As for other Danielle Steel novels to be reviewed, be on the lookout. You never know when the inspiration will hit me. And if based on my DS resurgence of late, you’ll be pleasantly surprised. Not only of my sudden focus on this woman’s backlist but on other authors as well, other people whom I never thought would ever see the light of day on this wonderful blog of mine.