‘THE RUNAWAY DAUGHTER’ BY JOANNA REES 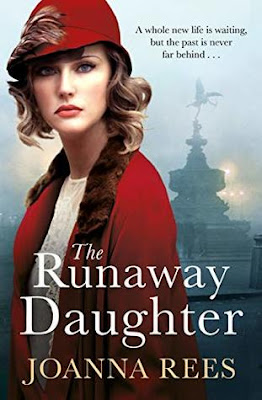 Well, it’s official, the bonkbuster sub-genre is dead. I shouldn’t be surprised since I’ve known this for quite some time. Still I cringe every time I think about it. You see, I’m a sucker for those sex and shopping novels and, despite their untimely demise, I guess I’ll always be a fan. Historical novels are still the in thing, apparently. Hence, this one penned by former bonkbuster writer Joanna Rees (as Jo Rees). THE RUNAWAY DAUGHTER (2019, Pan) it is called.  Though it may not be a bonkbuster novel per se, the highly-charged plot and sexual and romantic situations make it as close to it as it can be—in my book anyway.


Set in the swinging ‘20s (jazz, bobbed hair, shorten skirts), the story revolves around Anna Carson who, after fleeing her home in distress over a heinous crime involving her mean-spirited brother, ends up in downtown London where she, as Vita Casey, befriends a bunch of colorful characters who’ll help her bring to light the flapper in all of her. Of course, life—or in this case the author—has a way of slapping you when least expected as the past finally catches up with her. Will she be able to finally free herself from the blood ties that bound her?


I’m just about to finish reading this baby but so far I have nothing negative to say about it save perhaps for the way the author manages—at least in this one—to often put her heroine in favorable situations just so to get the plot going. It irked me a little at first then not so much as the dust finally settled and I was able to concentrate on the strong narrative of the story itself, that of friendship, acceptance, and love. Not any kind of love but a love for oneself and for others, despite whatever gender does it for you. And that’s a big deal for this queer reviewer, finally seeing some gay characters emerging in women’s fiction, not only as secondary ones, but as fun loving decent (well, some of them are) people who are a pivotal part to the plot.


There’s more to THE RUNAWAY DAUGHTER than what is mentioned but as usual I choose not to reveal too much so you guys can really savor the novel. And this is a keeper, supposedly the first in a trilogy. I look forward to finish it then to embark on the second book whenever that might be. Jo Rees may have escaped her bonkbuster past but the Joanna Rees we came to know is one fine storyteller as well.


You can catch this title whenever books or ebooks are sold. My thanks to the publishers and NetGalley for this ARC.


UPDATE: It’s a few minutes later and I finally turned the last page of this quite addictive novel. Color me surprised by that ending. That’s all I’m going to say.