‘ROSES ARE FOR THE RICH’ BY JONELL LAWSON 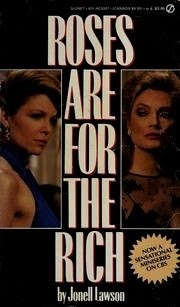 I admit, the only reason I ever approached this novel is my interest in the spectacular miniseries on which it is based. Mind you, I did read the novel before watching it all played out on TV. I wanted to savor the story from the get-go. Besides, I was so enthralled with glitz and glam at the time that I sort of made a rule to never watch an adaptation before reading the book. I never succeeded completely but I did try my hardest.


ROSES ARE FOR THE RICH (1986, Signet) is a gripping tale of passion and revenge set in Texas.  Jonell Lawson's heroine is a strong-willed young woman who will stop at nothing to avenge her husband and baby from a ruthless rich man who may have caused their untimely death. And boy, does she succeed at it. I won’t expand too much but hold on to your copy because the lives of the rich and the rotten in ROSES ARE FOR THE RICH are a torpedo of glamour, sins and dirty little secrets that’ll make you smile from cover to cover. Lawson's plot takes you on a wild ride of a girl's self-discovery who sets her mind to have it all no matter what, even at the cost of her own happiness. You may not end up agreeing with her choices, but one thing's for sure, this gutsy woman's journey definitely makes for an impossible to put down read.


Alas, this is the only work available by this author. She passed away in 1987 at the young age of 51. She never got the chance of seeing her work on the small screen when it aired in mid-May of the same year. A shame, for I think she would have been proud of the results. I will definitely review the miniseries one of these days. I’ve been meaning to but never got around to it. In fact, if everything goes according to plan, I intend to focus even more on hidden gems such as ROSES ARE FOR THE RICH. They’re what really set my motor going. I sometimes have to remind myself of that. Anyways, pick up this title if you ever cross paths. The connection will likely be worth it.

Labels: Roses are for the Rich by Jonell Lawson

That's Lisa Hartman on the right side of the movie poster but I can't make out who is on the left.

Greetings, Scooter. Her name is Sharon Wyatt. She was mostly a fixture in soaps like General Hospital, Passions, Dallas.